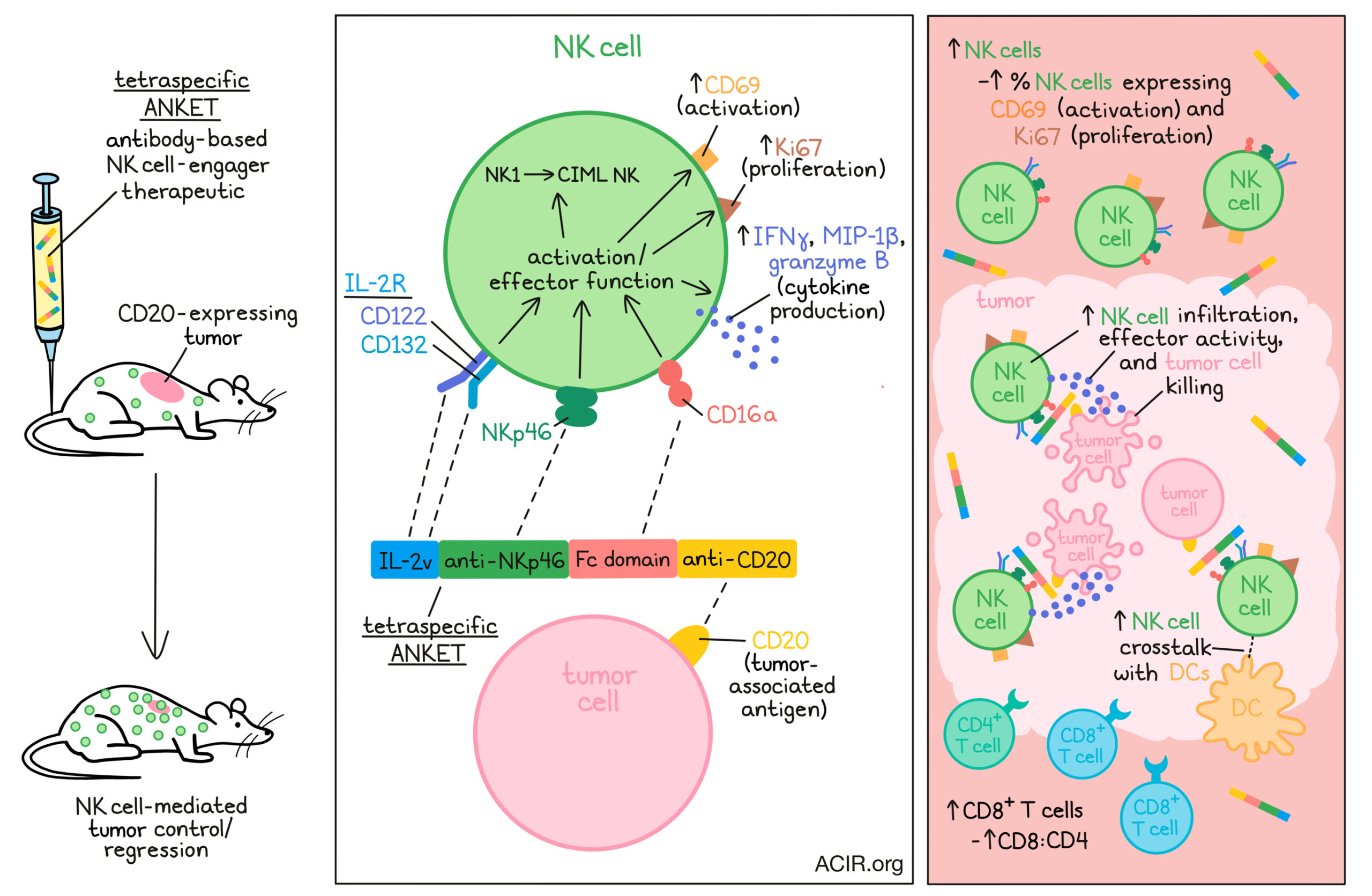 NK cell targeting is increasingly gaining interest for cancer immunotherapy due to its potential to induce effective antitumor responses with a limited risk of toxicities. To achieve effective activation of NK cells, co-engagement of different activating receptors is required, and IL-2 signaling can further increase NK cell activation and proliferation. To induce tumor-specific NK cell activation, Demaria, Gauthier, Vetizou, et al. made use of a tetraspecific antibody-based NK cells engager therapeutic (ANKET) that utilizes a tumor-associated antigen (TAA) to direct and and activate NK cells. Their preclinical research assessing its efficacy and safety was recently published in Cell Reports Medicine.

Given that NK cells express NKp46, CD16a, and the CD122-CD132 dimeric IL-2 receptor in blood and the tumor microenvironment, engaging these receptors was a goal in creating the ANKET. The tetraspecific ANKET comprised (1) an antibody fragment targeting and activating NKp46; (2) an IgG Fc domain that binds and activates CD16a; (3) an IL-2v that binds CD122 and CD132, but not CD25 (to limit activation of Tregs and preferentially promote NK cell IL-2R signaling); and (4) an antibody targeting CD20 as a model TAA.

In vitro experiments in the presence of the CD20+ Raji B cell lymphoma target cells showed that the tetraspecific ANKET activated NK cells, resulting in the production of IFNγ and MIP-1β. The levels of cytokine production depended on the CD16a and NKp46 binding, as ANKET controls without these binders induced limited cytokine production. When the IL-2v was missing, there was also less production of cytokines, suggesting that cooperation of the ITAM (NKp46 and CD16a) and JAK/STAT (IL-2) signaling pathways played a role in the functional activity of the stimulated NK cells.

Killing assays with the Raji cell line showed that the tetraspecific ANKET increased NK cell tumor cell killing, without causing off-target effects. Co-engagement with the tumor antigen and the activating receptors was necessary for the cytotoxic effects. Dose-response studies indicated that partial ANKET binding to NK and target cells was sufficient to induce killing activity, showing that the treatment can cause strong tumor killing even at low receptor occupancy of the TAA.

The researchers then performed RNAseq on NK cells purified from healthy control blood that were in vitro-activated with the tetraspecific ANKET. Engagement with the ANKET induced unique gene expression programs. Upregulated genes included those involved in NK cell activation and functions, cell-mediated killing, and structural components involved in regulating immunological synapse formation. Furthermore, pathways involved in NK cell effector functions, membrane trafficking, cell cycle, oxidative phosphorylation, and mTORC1 were stimulated. Gene set enrichment analysis showed enrichment in genes involved in IFNγ and cytokine responses. These gene expression patterns were specific for the tetraspecific ANKET and differed from controls missing one or more of the moieties. Additionally, there was an increase in genes involved in crosstalk between NK cells and dendritic cells, suggesting treatment may also promote adaptive responses.

Flow cytometry analyses revealed that the NK cells upregulated the activation marker CD69 after engaging with the tetraspecific ANKET, confirming the transcriptome data. To assess whether treatment activates specific NK cell subsets, NK cell gene sets were created for each NK cell subset described in the literature. ANKET stimulation shifted the profile of the NK cell population from predominantly the NK1 subtype (CD56dimCD16a+CD57+), to a population enriched in the cytokine-induced memory-like (CIML) NK cell phenotype. These CIML cells are a long-lived subset that exhibit NK cell effector functions.

The researchers then moved to in vivo models to investigate antitumor responses to the tetraspecific ANKET. CD20+ Raji B cell lymphomas were subcutaneously engrafted in immunocompromised mice, which had NK cells but lacked T and B cells. A single injection of the ANKET resulted in tumor regression and control for 30 days. In contrast, the anti-CD20 antibody obinutuzumab had a limited effect on tumor growth in this aggressive model. Using various doses of the ANKET showed that although there was a dose-dependent weight loss, there was a safe therapeutic window.

The antitumor effects of the ANKETs required NK cell engagement, given that no tumor control was observed without the CD20 binding moiety in the ANKET. Additionally, molecules lacking NKp46 and CD16a binders were less effective than the tetraspecific version. In the tetraspecific ANKET-treated mice, there was an increase in the number of NK cells and in the percentage of NK cells expressing the early activation marker CD69 and the proliferation marker Ki67.

To assess whether the treatment also increased NK cell tumor infiltration, the researchers used the Raji B lymphoma model in mice co-expressing human NKp46 to identify infiltrating NK cells in the presence of the ANKET that bound the mouse NKp46. Treated mice had a high infiltration of NK cells in the tumor microenvironment. Therapy also induced higher levels of Ncr1 transcripts (encoding NKp46) and levels of Ifn-γ and Gzmb transcripts, suggesting increased NK cell infiltration with effector activity. NK cell depletion abolished the effects on tumor control, confirming the need for NK cells for therapy efficacy. In immunocompetent mice, therapy induced expansion and activation of NK cells in the spleen. Furthermore, it increased CD8+ T cell levels, resulting in an increase in the CD8/CD4 ratio. In a CD20-expressing B16F10 melanoma model in immunocompetent mice, treatment also successfully controlled tumor growth.

Finally, the researchers assessed whether treatment could be safely and effectively conducted in non-human primates. A single dose did not induce any clinical signs of toxicity, but did deplete circulating B cells in a dose-dependent manner, suggesting safety and efficacy. There was also a minimal, rapid, and transient increase in the plasma levels of various cytokines, which returned to baseline within 24 hours.

The preclinical research presented here shows the potency and safety of a multi-targeted NK cell engager that stimulates NK cells to specifically target tumor cells, without inducing Treg responses. This therapeutic strategy can potentially be less toxic than other immunotherapeutic strategies. It is, therefore, of interest to determine whether this or other NK cell engager therapies translate to achieve similar results in patients.